The widow of a Bury St Edmunds man who died recently from an asbestos-related cancer is making a final appeal to former workmates, for information on how he contracted the disease.

Ian Mitchell, aged 72, was diagnosed in August 2018 with mesothelioma, a form of lung cancer always related to asbestos exposure and which is always fatal. 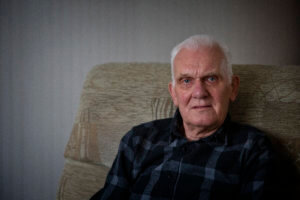 The material was once used widely in cladding and insulation, but its dangers were recognised during the 1980s and it is now a banned substance.

It is likely that Mr Mitchell came into contact with asbestos while working at Barber Greene in Bury St Edmunds between 1974 and 1985.

Barber Greene was a major local employer at the time. The company shipped parts for road machinery, for example, asphalt pavers.

Although Mr Mitchell may have breathed in contaminated dust 30 or 40 years ago, mesothelioma usually takes at least two or three decades to develop.

Lawyers working for Mr Mitchell’s family have established from other sources that asbestos was present at the works during that time.

Now, his widow Frances is making a final appeal to former workmates who may remember the presence of asbestos to come forward.

Her husband was a well-known colleague at the works and played football for the firm. She hopes that fact may jog somebody’s memory.

Mrs Mitchell has the right to sue for the illness caused by asbestos contamination that killed her husband. There is already evidence of asbestos having been present at the time, but in order to press a claim, she needs to hear from anybody who can remember her husband and what work he did.

‘We can be clear that Ian’s illness is caused by being in contact with asbestos dust during his working life,’ Phoebe Osborne explains.

‘Barber Greene seems the most likely place since we already know of the presence of asbestos in an unstable condition at the time he worked there.

‘We know there was a roll of asbestos which they would cut bits off, and we need to know whether Ian was involved or whether other asbestos products were being used.

‘We just need somebody to tell us they remember him and the working conditions they shared.

‘I know there is still a strong sense of camaraderie locally among ex Barber Greene employees. So we’re hoping that somebody may remember his name or his picture, and be able to shed more light on the tragedy.’

Phoebe Osborne can be contacted at Phoebe.Osborne@ashtonslegal.co.uk or on 07483 928171.